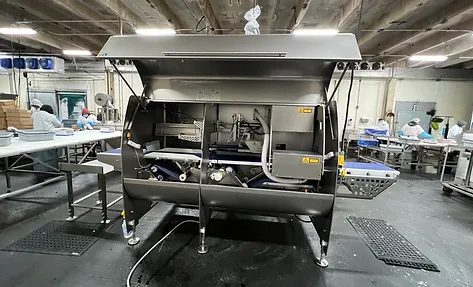 Anderson Boneless Beef is a toll processor specializing in custom portion cuts and grinds, high-quality and retail-ready packaging, private USDA labels, and third-party meat distribution. After 60 years in business as a food distributor, the company pivoted to become a single-ingredient processor. An acquisition by another company, Food Maven, prompted a fresh look at their meat portioning process.

“One of the first things we noticed was our yields were below industry standards,” Starr said. “Because we were hand cutting everything and hand cutting such a wide variety of products.”

In addition, hand cutting limited their ability to expand daily output. The manual process restricted production to about 8,000 to 10,000 lbs. per week and proved a significant bottleneck to the company’s ability to grow. Anderson decided to look for a solution that would allow them to automate their meat portioning process and increase their overall yields.

Anderson Beef contacted Ross Industries about potential solutions to their problem. Ross recommended the Marelec Portio 3-300 for its speed, accuracy, and ability to completely automate the cutting process.

The Portio uses a three-camera/laser system to scan the entire contour of a large primal. Based on the product’s density, the machine instantly calculates where to cut the product to optimize yield and minimize give-away while keeping the target weights in mind.

Starr said they liked the Portio’s smaller footprint, low maintenance, and ability to store recipes—a must-have for a toll processor with 160 unique SKUs.

The optional features really impressed him— such as grader integration and the front and back holders, which minimize product waste by keeping the first and last slices of the primal upright and stable during cutting.

“The front holder and the back holder are incredible,” Starr said. “Most other machines don’t have that, so you know the products are not falling down whenever you put it on the belt; it’s not falling when it starts cutting.”

After investigating Multivac and Marel machines available at nearly the same price, they determined the Portio far surpassed the other meat portioning options.

After a year of using the Portio, yields went up at Anderson Beef by an average of 8% to 13% every week (depending on the combination of products processed). Customers are ecstatic. Almost overnight, Anderson went from having below-industry-average product yields to consistently turning out products with above-average yields. In addition, Anderson’s average weekly product throughput has nearly quadrupled.

“The biggest scare for everybody, including us, is the upfront cost for a machine like this,” Starr said. “But it’s going to pay for itself in labor savings, and it’s going to pay for itself in yield. We had to remember not to get sticker shock and look at the big picture of everything…I mean, it’s been an awesome piece of equipment. I think it’s our favorite piece of equipment.”